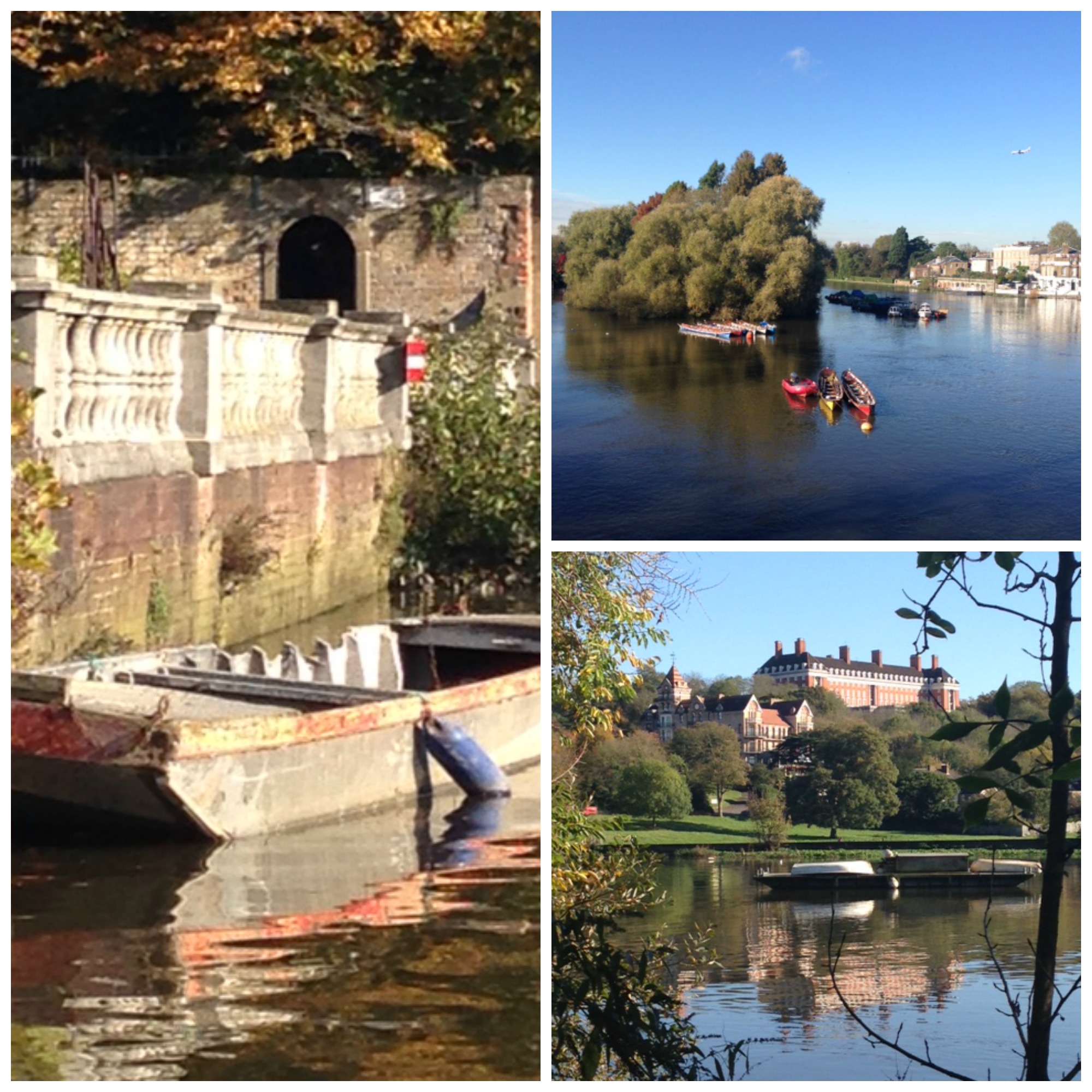 This is one of my favourite London walks, taking you past picturesque Georgian town houses, secret gardens, grand stately homes, boats and meadows until you see the dramatic sight of Richmond in the distance.

I discovered this magical walk by accident when I was in Twickenham for an appointment. What had seemed like an annoying trek across London, turned into a delight on finding what lay beyond Twickenham high street.

Catching a glimpse of the Thames at the bottom of a side street I was drawn down and discovered just how pretty the riverside is. This is the oldest part of Twickenham with the beautiful St Mary church – Queen Anne with a much older medieval tower – cobbled streets and quaint 18th century buildings including an old museum and a theatre – it’s like something out of a Jane Austen novel.

You pass under a pretty bridge, which crosses into an intriguing waterfront garden with just the top of a classical Italian fountain visible. I later discovered the garden – York House Gardens – is open to the public – and is just as eccentric and secret as I’d imagined. When I visited I had the garden, scattered with Italian sculptures, all to myself.

You walk on past more picturesque Georgian houses, until you reach a nice old riverside pub, The Swan – with a floodable beer garden – a good place for a pit stop. Alternatively, if you fancy a coffee more than beer, there’s a cafe just a little further along at Orleans House Gallery, with gardens and a changing programme of exhibitions

The Thames starts to feel very rural here, with cow parsley lining the banks and avenues of trees, trailing their branches into the Thames. You could either carry on to Richmond where you’ll see the striking Marble Hill House on the left, its perfect Palladian facade sitting in a huge stretch of green lawns. Owned by English Heritage the lawns are open to the public and are perfect for picnicking on.

Alternatively cross the river, for £1 by ferry to visit the elegant 17th stately home, Ham House, owned by the National Trust, just visible between the trees.

Another possible detour is Petersham Nurseries – lunch amongst the plants and water fountains. Then on to Richmond past the buttercups of Petersham meadows with cows grazing on your right and the Imposing Royal Star and Garter building of Richmond in the distance.

Finally you’ll see the impressive sight of elegant Georgian terraces of Richmond rising up on the distant grassy slopes and walk on until you come to Richmond Bridge. You could do the walk in the other direction of course – either way, its a winner! 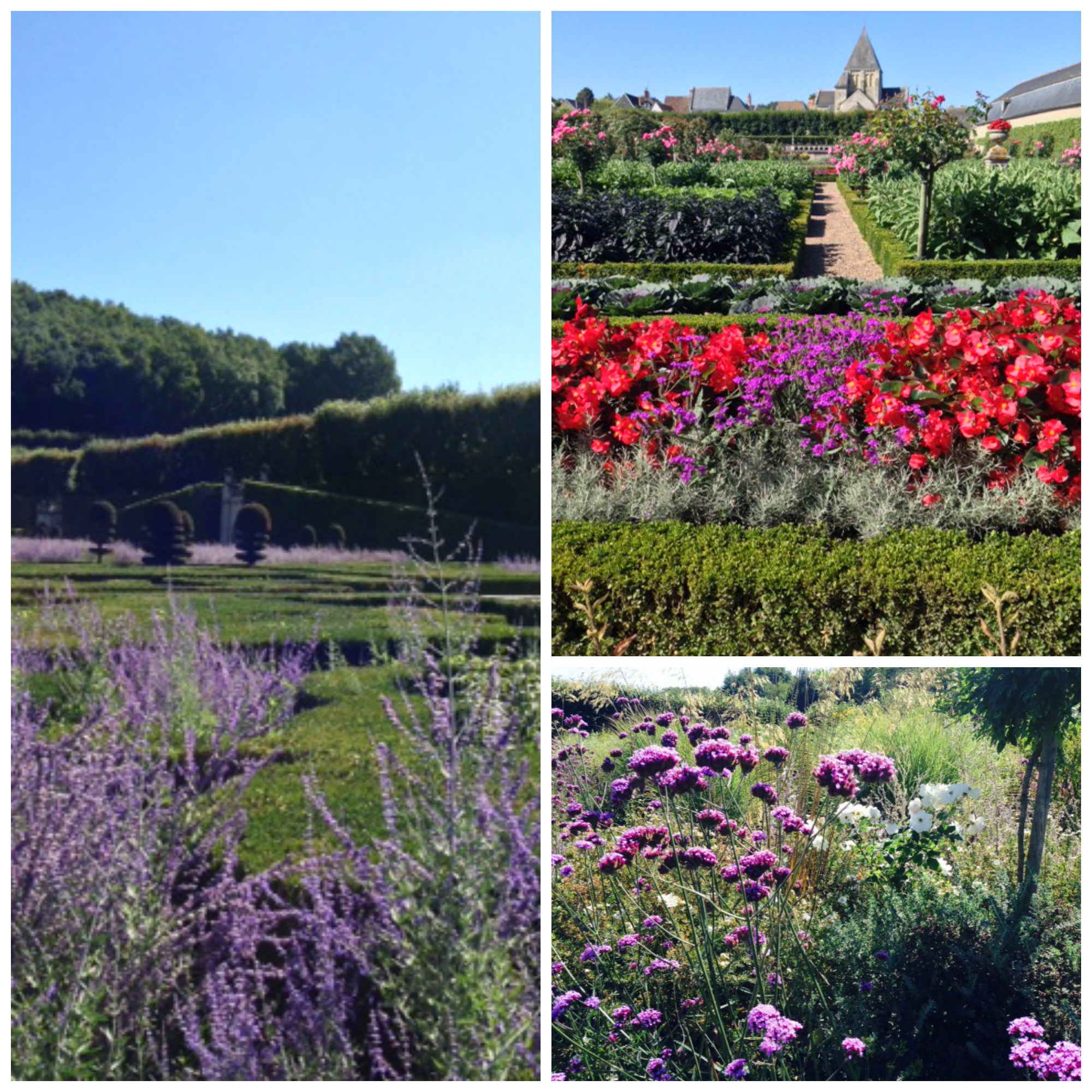 It was only a matter of time before I’d drag my family to a garden, on our holiday in France this year. We were in the Loire, famous for its chateaux, so I picked the one with the most impressive-looking gardens – Villandry.

It didn’t disappoint. From immaculate formal gardens to looser contemporary planting, pools, fountains and woods, we were all bowled over – there was even a maize and play area for the children.

After admiring the fish in the chateau’s moat, we crossed over into the ornamental kitchen gardens – nine plots in a grid, planted with a tapestry of vegetables and flowers, sparkling with colour in the late summer sun. Jade green carrot leaves, blue leeks and deep purple cabbages were set off by bright flowers – red hot begonias clashed wonderfully with verbenas, beds brimming with yellow targets looked striking with line of blue salvias running through them. Stunning.

In the ornamental garden – planted in box hedges of symbolic patterns, I loved the garden symbolising music, a serene space where dreamy spires of Pervoskia poked up between geometric box triangles – almost contemporary in its simplicity.

The Sun Garden, representing both the warmth of the sun, and cooler clouds, is the most recent addition, commissioned in 2008, and designed in part by Louise Benech. In the Sun Garden, where beds radiate out from a sun shaped pond in the centre, the planting glowed with the golden yellows of the rebekias, orange potentilla and flashes of deep pink roses. In the adjacent Cloud Garden, where little grassy paths meander through beds, there was a cooler palette of blue and white, shrub roses, white potentilla, phlox, with Verbena bonariensis and grasses swaying above.

The calming water garden with a pool and water fountains is a perfect place to take a pause, before climbing up to the higher terraces for a breathtaking last view of this remarkable garden from above. 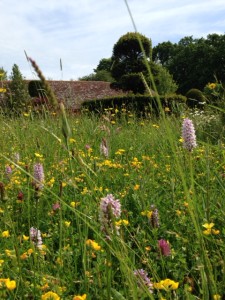 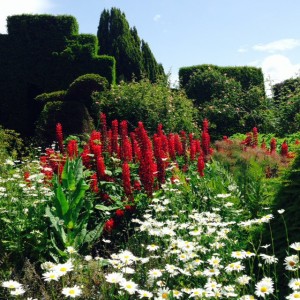 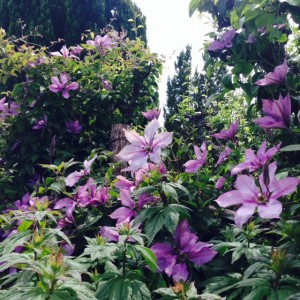 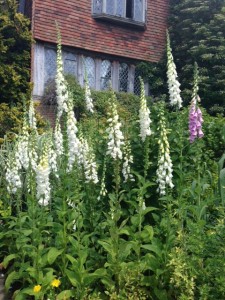 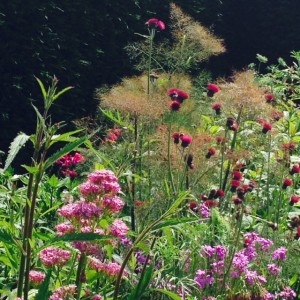 We picked a perfect day for our trip to the famous gardens of Great Dixter, and after a meandering bus journey from Rye, through the Sussex Weald, we arrived at the low-key ticket office.

Your first glimpse through the small garden gate is of a long path leading up to the beautiful half-timbered Arts and Crafts house, bordered on either side by pretty meadow dotted with native orchids and buttercups.

The late Christopher Lloyd made the garden famous with his open-minded and experimental style, which is carried on today by head gardener Fergus Garrett, who favours a relaxed, naturalistic planting.

It’s the contrast of formal and informal that makes Great Dixter so refreshing. In the Peacock garden, the architectural yew topiary is softened by the mass of dancing white  daisies that surround it, with a huge drift of deep red lupins adding a striking splash of colour.

The paths in the High Garden are so small, with flowers towering up either side of you, it’s like being lost in an English garden jungle. Often a riot of colour, with geraniums, forget-me -nots and poppies roaming free and giant fennels, thalictrum aquilegifolium, and even flowering parsnips swaying airily above. Free-standing rose briars and rambling clematis add to the untamed feel.

I have to admit, I was drawn to the soft, romantic border in the vegetable garden, a harmony in pinks and purples, with its repeated tall feathery bronze fennel, mauve valerian and splashes of hot pink plume thistle ‘Atropurpureum.’

Yet it’s only by experimenting that you can find surprising new plant combinations and Great Dixter is a lesson in letting your gardening hair down and giving it a go. It’s like a breath of fresh air.

It’s tempting to only visit lovely gardens on warm summer’s days –and it’s true you can then linger longer and everything sparkles in the sun. But it’s also revealing to visit a grand garden throughout the year. At a … Continue reading →

Welcome to WordPress. This is your first post. Edit or delete it, then start blogging!